For 100 years, Broadway and Mississippi had been dominated by the Gates Rubber Factory and the Ford Motor Company which produced Model Ts back around the turn of the previous century. Platt Park to the southeast was something of a company town for nearly a century, with a sizable portion of residents working for the company. The factory was eventually shuttered in 1991, and the buildings languished for a decade before redevelopment plans in coordination with the City began to take shape. The area has been gradually transformed in what so far amounts to a small city of apartment buildings. Here is a quick rundown of what has happened in recent years.

2009: the Windsor Apartments on the southwest corner of Broadway/Mississippi were completed and opened bringing 419 housing units into our community. The property stays consistently rented at about 95% occupancy. The property has at least one parking space per unit, but those are rented separately from the units. There is some limited commercial property that fronts Broadway.

2015: The 1000 Broadway Apartments were opened on the northeast corner of the Broadway/Mississippi intersection. There are 260, one- and two-bedroom units and they run at over 90% occupancy consistently. There are over 400 parking spaces, but the listing office indicated that the garage is not even close to being fully leased—which means some residents either do not have a car or choose to park their car elsewhere. No commercial spaces were created in this building. The building was resold in October of this year for $91 million or $350,000 per unit.

2018: The Henry, on the corner of Mississippi and Logan opened its doors. The Henry is hard to miss with its sizeable scale dominating the intersection. The Henry has 403 “luxury” units that range from $1,650 a month for a studio apartment to $3,680 for their premium two-bedroom units. The Henry has 700 parking spaces, is currently 91% occupied, and does not incorporate any commercial space.

2018 also saw the opening of Hanover Platt Park on the east side of Broadway. The Hanover building has 303 units, most of which are one- and two-bedroom units. The building is 90% occupied with no commercial space.

To put all that in perspective that is almost 1,400 housing units that have been added in the past decade.  The surrounding neighborhoods of Platt Park and West Washington Park each have about 3,000 homes, apartments and condos respectively so simply put we’ve added “half-a-Platt Park or Washington Park” to that fairly tiny area. None of those projects have significant retail space for restaurants, coffee shops, or the like. Because all of those projects charge additional for parking, some residents save a few bucks by parking on the surrounding streets.  No wonder local residence have begun to feel a little squeezed.

You Ain’t Seen Nothing Yet

If all that wasn’t significant enough, let’s take a look at what is coming to the area now labeled as Broadway Station, on the northwest corner of that intersection, the prime site of the former factory.

By urban infill standards the area is huge, 41 acres in total. It is the largest urban infill site in Denver and one of the largest in the country. The area has been zoned by the City of Denver into four development areas (see map) bordered by Broadway to the east, Santa Fe to the west, and with railroad and light rail lines running through the middle.

The northeast corner is owned by RTD and will continue to be a primary light rail hub with parking for riders. There are no current redevelopment plans for this corner.

The southeast corner is where we will soon start to see redevelopment taking hold, as early as next year. The area was purchased by Texas-based Endeavor Real Estate Group.  The preliminary plans for the 7.5-acre parcel call for five or six structures. Two will be office buildings and will be up to eight stories high. The other three or four buildings will be apartments with those to top-out around five stories. All of the buildings will incorporate ground-floor retail space. That translates to about 100,000 square feet of retail, 400,000 square feet of office, and about 900 apartments.  The retail will center around a pedestrian mall that will be extensions of Acoma Street and Tennessee Ave.

Crossing the railroad tracks to the west is the largest section which the City has designated into two zone districts; one for residential and one for commercial. The commercial area is being called Santa Fe Yards. The plan is to develop up to 1 million square feet of Class A (read, really nice) office space. Four separate office towers will be constructed each up to 12 stories tall. A 5.36-acre park called Vanderbilt Park East will be built with outdoor amenities for both office workers and residents (for comparison that is twice the size of the park in Platt Park). The buildings will have 2,815 parking stalls but are being built to highlight connectivity with Broadway light rail station via two connecting pedestrian bridges over the rail lines. 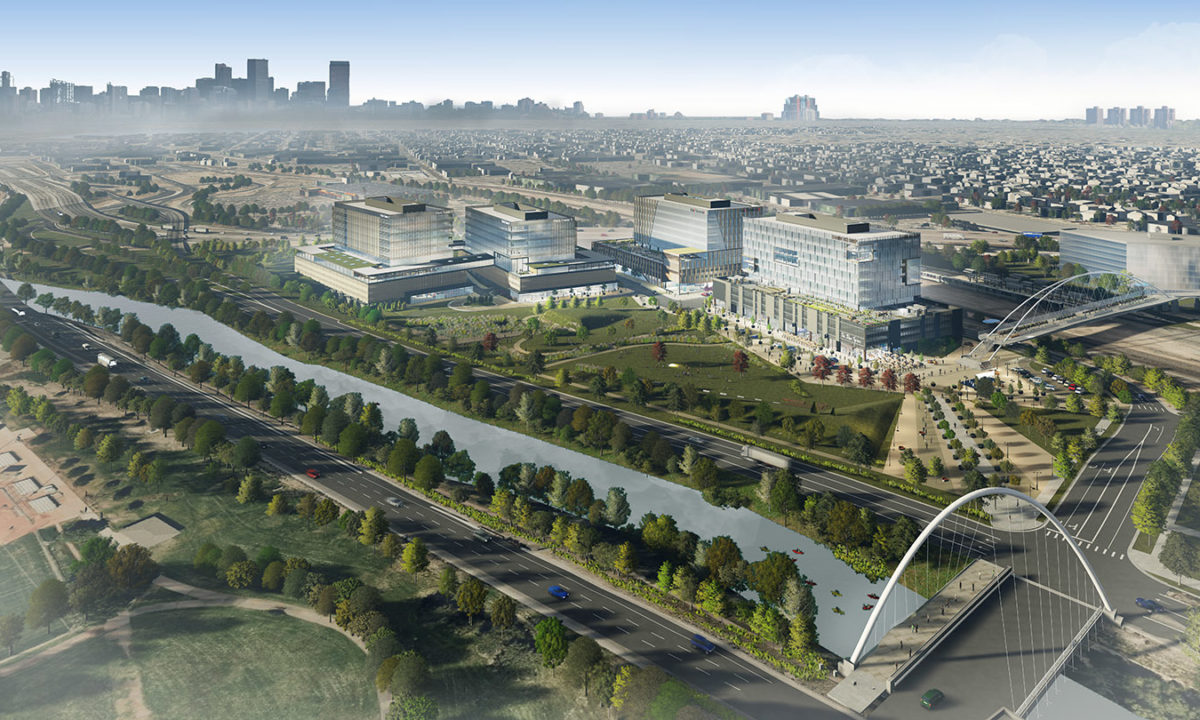 The southwest quadrant is currently called the Santa Fe Residential District. Plans call for three separate multi-family buildings consisting of, in total, approximately 1,000 units. Parking for 1,100 vehicles will be provided. There is currently no timetable for the development of this area.

Whew that’s a lot of information! Let’s boil that down to a few relevant details:

Taken all together the Broadway and Mississippi area will have more residents than all of Platt Park or West Washington Park. Add to that however many workers fit into 1.4 million square feet of office space (answer: almost 10,000) and you begin to grasp the scale of what is coming.

I see three primary areas of long-term impact on the surrounding neighborhoods:

Congestion. Hate to start off on a negative but it is a reality. There are going to be more cars flowing from the over 6000 parking spaces and more renters and office workers in the area. Certainly, the project is on the edge of the existing neighborhoods and not right in the middle, but undoubtedly there will be people and cars coming that way. There are a few things that can help—like permit parking on streets—but ultimately options are limited to mitigate the effects.

Property values rising. With thousands of new renters and wannabe home owners wandering in and around the Platt and Washington Park neighborhoods, many are going to conclude that those are charming places to live and will want to become buyers. More buyers equal more demand and that results in increasing prices. Those areas have pretty much seen relentless appreciation over the last decade so look for these projects to keep the upward pressure well into the next one.  This of course is good news if you are a home owner and value more equity, not so good if we are just considering property tax values.

A significant new social and community hub.  Some have described the coming projects to resemble Cherry Creek North with all its trendy shops, restaurants, Class A office space and luxury apartments. Add to that a large park and this could be yet another compelling Denver destination.  The vision and plans are certainly there so let’s hope for great execution in the coming years.

Denver is certainly a dynamic, ever growing metropolitan area.  With all economic and population gauges pointing upward don’t look for that to change.  How we cope both individually and corporately will be key to keeping our City a wonderful place to live and enjoy.  Reach out to your City Council representative and look for ways to keep informed and involved.  We can’t stop progress but we can have a voice—let yours be heard!